Home > Behavioural Problems > What to Do When Children Lie 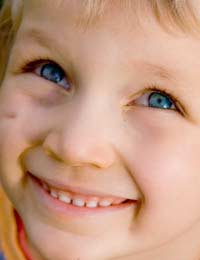 A lot of adults tell lies. Some tell little white ones, while others tell whopping great ones. Children are no different. Some lie to get sympathy or attention, while others lie to divert blame and stay out of trouble. The best way for a stay-at-home dad to teach his children that honesty is the best policy is to lead by example and be as truthful as possible.

Of course, this is easier said than done and can leave parents with some taxing conundrums. For example, should an honest dad come clean about Santa Claus, the Easter Bunny and the Tooth Fairy? Some parents may feel that telling the truth is the only proper course of action, as every child will unearth the facts eventually and can then point an accusing finger at parents who have lied to them.

Another view is that parents who tell stories about Rudolph and Lapland and are not really lying but just pretending. Explain to children that pretending can be fun and allow the child to pretend, as long as it is in the context of a game.

A Househusband can face another dilemma if a child catches him telling little white lies. For instance, parents may fib to friends and relatives occasionally in order to dodge party invitations or weekend visits. If a child finds out and confronts parents, try to explain that sometimes it is okay not to tell the truth if that truth will hurt someone’s feelings.

Try to think of an example that the child can relate to. Perhaps, for instance, a favourite auntie got the child a toy that was not the one he really wanted. In this case it would be okay for the child to say that he liked the toy because if he said he didn’t like it his auntie would be upset. This can help a child to understand the need to consider other people’s feelings and be compassionate.

Get to the Truth

Of course, most of the time lying should not be tolerated and a stay-at-home dad should have a set of rules to deal with a child who lies. If a dad suspects a child is making things up or embellishing a story to gain sympathy or attention, rather than dismiss it out of hand he should try to get to the truth. Explain to the child that telling lies repeatedly will make it difficult for people to believe anything he says, even when he is telling the truth.

When a dad knows the child was responsible for a wrongdoing, he should state this as fact. Do not try to set the child up by asking open questions such as “what happened here?” or “who did this?”, as that will give the child a perfect opportunity to lie. Praise a child for telling the truth and try not to get angry if a child does own up to something, as this will only discourage the child from telling the truth in the future.