Home > About Mum > Remaining Friendly with the Mother of your Child

Remaining Friendly with the Mother of your Child 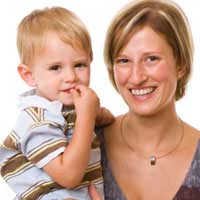 In the vast majority of cases, a mother will be granted custody of her children ahead of a father in UK courts. When relationships break down, most children will stay with their mother under a residence order and a single dad will get to see his children with a contact order.

But in certain exceptional circumstances the courts will favour a single father’s application for custody. If the mother has a criminal record that shows her to be a repeat offender, or a history of addiction to drink or drugs, is emotionally unstable or has a physical handicap then custody of the children may be given to a single dad.

Similarly. if there is evidence of physical or emotional abuse of a child by a mother, or if a mother is deemed to have abandoned her children, the father can receive custody. The financial status of both parents will play a part too.

When a single father is awarded custody, he has the same rights as a mother with custody, and in most cases the mother will have visitation rights with the children. The breakdown of a relationship can be stressful and difficult for those involved, even more so if children are involved. If some exceptional circumstance has led to the father being granted custody, the resultant situation can be even more complex and demanding.

Single dads must be sure to obey the mother’s contact order fully, and parents should be careful to keep the split or divorce an adult-only issue. Although it may be tempting, do not involve the children in spying on a partner. Children should not be expected to keep secrets or tell tales, regardless of their age.

Remember too that young children can take comments literally and jump to conclusions. Try not to be openly critical of an ex-partner in front of the children, however difficult this may be. Remember that she is their mother and if the need to let off steam is overbearing, chose a more suitable audience, time and place.

That does not mean to say children should be told nothing. This will be a tough time for them, so share information that will ease their concerns, such as whether or not it will be necessary to move into a new home.

For the sake of the children, a single father should do his best to take the higher moral ground. He should try to be as nice and as friendly as possible with his ex-partner and, where possible, involve her in parenting decisions. This may disarm her and lead to the affable behaviour being reciprocated.

Do not try to compete with an ex-partner when it comes to buying birthday or Christmas presents for the children or booking holidays. Instead, spend as much quality time with the children as possible and, when the children are with their mother, a single dad should use and appreciate the time he has to himself.

Fathers should be aware that a mother can always come back with her lawyer in a bid to regain custody of her children. She can petition the court to have the residence order changed and, if she can prove herself to be upstanding and likely to be a good parent, there is a chance she may win custody, although the children’s wishes will be taken into account by the court.

Time for Mum and Baby