Coping in a Househusband's Role 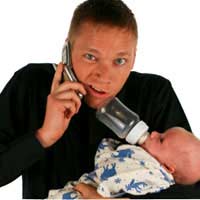 A househusband’s job description is not the most appealing. The hours are long and anti-social, the work is often mundane, repetitive and boring and there is no pay and no holidays.

There is nothing particularly difficult about the work. Changing nappies and washing, dressing, and feeding a baby are all fairly straightforward tasks, once you know how. Even the role of child entertainer can be mastered quickly.

The work is relentless, however. A househusband’s working day starts when he wakes or, more than likely, when he is woken. Thankless household chores, such as washing dishes, sweeping floors, laundry, cooking, vacuuming and dusting have to be fitted in around caring for the baby. If he’s lucky, a househusband may manage to squeeze in a couple of hours of free time before he collapses into bed.

What Will Others Say?

It’s not a cool job either. It may sound very New Man, but male friends are more likely to scoff than be impressed. After all, the main reason men end up at home looking after the baby is that their partners have greater earning power than they do. Taking on the role of househusband is akin to carrying around a placard advertising that fact.

So, on top of everything else, the low status attached to the role of househusband can sap self-esteem. Yet for decades, if not centuries, millions of housewives up and down the country have been able to reel off a list of such complaints, and surely a househusband is nothing more than the male equivalent of a housewife.

There is, of course, an upside to being a househusband too. It is a huge privilege to be able to play such a prominent role in the upbringing of a child. What payslip could possibly compensate for missing a child’s first smile, first step or first words? No-one is likely to regret time spent as a househusband. Put another way, not many househusbands will lie on their deathbeds thinking: “I wish I had spent less time with my child.”

And okay, there may not be a career ladder to climb, but new skills will be picked up along the way. For a start, a househusband will discover levels of patience and sympathy that he may not have known existed, and his reward will come when every ounce of the love he has invested is returned by the child.

There will, of course, be times when a househusband yearns for adult conversation, convinced his IQ is being seriously diminished by endless reruns of 'In The Night Garden'. But the office banter won’t be missed for too long. Young children can be hugely entertaining, and an hour spent listening to inane ramblings or watching a child’s first encounter with a handbag or some play dough can be captivating.

Sacrifices must be made, and it means an end to booze-soaked weekends and spontaneous midweek trips to the theatre or cinema. Expensive hobbies may have to be shelved and it may even be necessary to downgrade the car or remortgage the house, but it’s a small price to pay.

Having said that, it is hard work being a househusband, particularly if the intention is to combine the role with some paid, part-time work. It is not something that should be entered into lightly, as it’s impossible to just walk away from the job if it doesn’t suit. If in any doubt, a househusband should have a trial run while his partner is still on maternity leave.