Home > Case Studies > I Lost Friends When I Became a House Husband: A Case Study 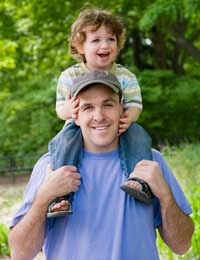 A baby can cramp your style when it comes to socialising. Free time is at a premium for most stay-at-home dads and it can be difficult for friends – especially those without children – to understand. Eddie Jones was one of the lads, but the arrival of his daughter, Ella, changed everything.

“I had a group of mates that I spent a lot of time with before my daughter was born,” said Eddie, an electrician from Norwich who was 22 years old when Ella arrived. “Most weekends were the same. We’d go to the pub on a Friday night, support Norwich City – home or away – on a Saturday and meet up with our girlfriends for a curry and a few drinks on a Saturday night.”

“Five of us all played for the same Sunday league football team, and after the match we’d be back in the pub for a game of darts. That was the weekend routine and it didn’t change much during the football season. In the summer, we’d watch and play a bit of cricket and jet off together for a couple of weeks in the sun.”

“My girlfriend, Sarah, is a couple of years older than me and had just got her degree in law when she fell pregnant. We had planned to get married and have children, so we were happy enough, even though it was a surprise. It did mean we had to make big lifestyle changes though, and money was tight right from the start because we had to save for nursery furniture, a pram, a car seat, baby clothes and all the usual stuff.”

“I still went to support the Canaries with my mates on a Saturday and played for the Sunday league team, but cut out the trips to the pub. Before Ella was born we decided it would be better if Sarah got a full-time job and I did the childcare duties, because Sarah had the potential to earn far more money than I could. Also, at weekends, when Sarah was around to look after Ella, I was able to pick up the odd bit of work to boost our income.”

“That meant I started to miss most of the Norwich matches and I started to get some stick from my mates. It was the usual stuff about being under the thumb and I laughed it off at first. But, as time went on, I saw less and less of my mates and when we did meet up I noticed that I’d become the butt of every joke. The banter got nastier and nastier and it started to get to me.”

“Eventually I just stopped seeing my mates altogether. I guess we had just grown apart and what was important to them simply wasn’t as important to me anymore. I had made new friends anyway – people with young families like Sarah and me. It means that instead of football dominating the weekends, we now do things that the children will enjoy (Ella now has a younger brother, Tom).”

“I know that my old mates still have the same routine every weekend, and I’ve since done the odd bit of work for a couple of them that have their own flats. Maybe we’ll all meet up again if they eventually settle down and have families of their own, or maybe we won’t. We’ll just have to wait and see. Either way, I’ve no regrets about what happened, because I wouldn’t swap my family for anything in the world.”

I Quit My Job to Be a Househusband: A Case Study